My brother in culture, Andrés, turned me on to this film which came out in 2019. The promo for the film reads as such:

YELLOW ROSE is the timely story of a Filipina teen from a small Texas town who fights to pursue her dreams as a country music performer while having to decide between staying with her family or leaving the only home she has known.

Directed by Diane Paragas, the film is written by Paragas, Annie Howell and Celena Cipriaso based on a story by Paragas and Andy Bienen. The film is produced by Paragas, Cecilia R. Mejia, Rey Cuerdo and Orian Williams. Executive Producers are Olivia De Jesus and Karen Elizaga.

The trailer is moving, and it looks like this film will do well far outside of the domain of the art house, or so I hope.

Thanks to my friend Mark, who has a eye for amazing podcasts, for this documentary. Sammy “The Bull” Garavano was one of the most feared mob bosses in history, and this talk he has with Patrick Bet-David of Valutainment is two hours of thoughts on criminality, sociology, modern politics and what he has in store for the future. It’s a tour-de-force of brutal common sense.

Even though the special effects pale by today’s standards, be prepared for a bit of a mess if you have a weak stomach.

Still, Sanjuro, the masterpiece directed by Akira Kurosawa and starring his favorite actor, Toshirō Mifume, is as elegantly violent a film as has ever been produced.

Many thanks to my old friend Andrés for sharing this pleasant history of Goth.

Gina Lollobrigida photographed by Leo Fuchs, 1960. Check out the Italian poster of The Servant here

Respect to director and documentarian Brett Garamella for weaving a story of Assyrian Christian cab driver Estaifan Shilaita, who was a talented boxer in his native Iraq until he was forced to flee to America.

From 1968 to 1976, Estaifan Shilaita was the boxing champion of Iraq. Despite his success, Estaifan was barred from representing the Iraqi national team. After this defeat and seeing many of his family members affected by the newly emerging Ba’ath party, he risked everything to leave his home country. He traveled to Greece where he struggled to keep himself afloat as he watched his dreams of boxing slip away. Everything seemed hopeless until he meets his wife Hannah who brings a joy into his life that has lasted almost 40 years. Although Estaifan never finds the success in sports he desires, his journey leads him to a greater success and fulfillment than he ever imagined growing up in Iraq.

Seeking Movies notes the passing of Yugoslavian Black Wave director Dušan Makavejev, who passed away yesterday at the age of 86.  It was his film Love Affair, or the Case of the Missing Switchboard Operator (Serbo-Croatian: Ljubavni slučaj ili tragedija službenice P.T.T.) was my first introduction to Yugoslav film, and it provided what many critics see as the most iconic still of the genre, below.

Burkinabé director Idrissa Ouedraogo passed away today at the age of 64. He was one of Africa’s best auteurs. The film being shared here, Yaaba, portrays the rather odd coupling of a boy and an elderly woman who was spurned by her village, as posted in the obituary.

via On set of “Au Hasard Bathazar” —

We admire the posts of Kino Images, and thought it would be nice to share a still from one of French auteur Robert Bresson’s masterworks. 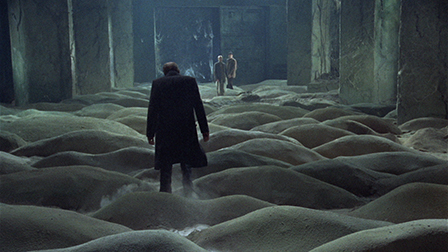 Great news! One of Andrei Tarkovsky’s greatest films, Stalker, has been reissued on Blu-Ray by The Criterion Collection.